You are here: Home / Mediterranean / Egyptians vote for new parliament 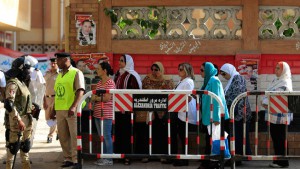 Egyptians began on Sunday voting in the country’s first parliamentary elections since former President Mohammed Morsi was ousted in 2013, amid voters’ reluctance to cast their votes for Islamists or officials of former President Hosni Mubarak.

Egypt’s long-awaited legislative election, with some 55 million eligible voters in total, is held in two stages covering the country’s 27 provinces. The first stage is held on Oct. 18 and 19 while the second will be on Nov. 22 and 23.

The banned Muslim Brotherhood swept the previous parliament along with Salafists or Sunni fundamentalists. The previous assembly was dissolved in June 2012.

The Salafist Al-Nour Party is the only Islamist political party in the election. Al-Nour won about a quarter of the votes in the country’s first post-Mubarak parliamentary polls held in late 2011, coming second after the Brotherhood.

As Religion-based parties are banned according to the 2014 constitution, Al-Nour always denies its religious affiliations and defended itself as a party with religious background.

Kareem Al-Senoty, retired engineer, expressed his rejection for any religious-based nominees in the new legislature. “It’s my duty to vote and prevent the success of the Islamists as lawmakers.”

“We need to separate religion from politics; we are a civil rather than a religious country,” Al-Senoty, who was accompanied by his two daughters in Kafr-Abdoo center of the coastal city of Alexandria, told Xinhua.

Reserving 75 percent of the seats for the individuals will likely make the new assembly vulnerable for the Islamists and the wealthy remnants of the former President Hosni Mubarak’s dissolved National and Democratic Party, and threatens with using the political capitals in affecting laws to be endorsed.

“I will give my voice for anyone, even if I don’t know him very well, provided that he or she isn’t affiliate to the former President Mubarak’s regime or the Brotherhood,” Sanaa Yassin, 42 housewife said.

“We went through two uprisings to avoid the old faces who turned the country into perplexity,” she said, adding that the Egyptians deserve better servers.

More than 27 million voters from 14 provinces are expected to cast their ballots on Sunday and Monday in the first phase, according to the country’s High Electoral Committee.

The polls will mark the last milestone in Egypt’s three-stage roadmap to democracy, after adopting the new constitution and holding the presidential elections.

Egyptians are sick and tired of an ailing economy and insecurity that followed its two uprising, hoping the new parliament will bolster the country’s pillars and bring laws that can improve their conditions.

“It’s duty of all the Egyptians to show up and cast their votes for the new legislature to build our country on legal bases,” said, Mahmoud Mokhtar, 52 years old, science teacher, while casting his vote in the Giza district of Imbaba.

“I came to vote since I feel the challenges and dangers surrounding my country, and that I hope my participation in the election will strengthen Egypt,” Mokhtar added.

According to the voting process, nearly 16,000 judges will supervise the process, while other 87 international and local non-governmental organizations got the licenses for observation.

The early hours of the voting saw a low turnout, with the coastal city of Alexandria reading the biggest rate of participation, a spokesperson for the High Electoral Committee, said.

He added the female turnout is fourfold of that of the males, while the old-age categories topped the scene.

Due to threats of regular militant attacks since the ouster of former Islamist President Mohammed Morsi, at least 185,000 military troops will secure the election as the polls open, official news agency MENA reported. The Interior Ministry said they will be joined by 180,000 police.

In the early hours on Sunday, security forces defused two bombs planted near a balloting station in Fayoum province. Locals also reported a dubious object near the fence of a primary school grouping many election committees. No casualties have been reported, MENA added.

Later in the day, another four bombs were dismantled in Giza district of Kerdasa, a crowded region with Islamists, state-run Ahram website reported.

In a TV speech to the nation Saturday, President Abdel Fattah al-Sisi called on all Egyptians to head to the ballot boxes. He also urged the armed forces and the Interior Ministry to secure the voting process.

The new-elected parliament will be made up of 596 seats, of which 448 will be elected as independents, 120 will go to winner-takes-all party lists, and the rest 28 will be presidential appointees.