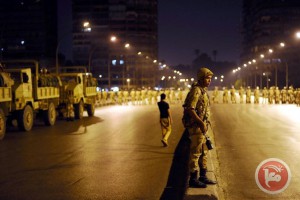 An Egyptian soldier was killed and a number of others were injured Monday nigth after an explosive device hit a military vehicle that was patrolling a section of the border area between Israel and Egypt.Egyptian security sources told  Ma’an that a military vehicle was scanning the borders in the Bir Main area of the central Sinai Peninsula “near international border mark number 52” with Israel.

The sources said that during the patrol, an explosive device went off, killing a soldier and injuring a number of others.
The wounded were evacuated to a public hospital in the southern Sinai, sources said. It remained unclear how serious their conditions were.
Egyptian military and police forces have been the target of ongoing attacks, which have increased since Egyptian President Abd al-Fattah al-Sisi took power from democratically-elected Muhammad Morsi of the Muslim Brotherhood in 2013.
The Egyptian president came under attack following his violent suppression of Muslim Brotherhood members following his rise to power, which Sisi has argued is necessary to deter future attacks in the Sinai and across Egypt.
Ansar Beit al-Maqdis, the militant group responsible for a majority of attacks on military personnel, aligned with the Islamic State group in November 2014, changing its name to Sinai Province.
maannews.com