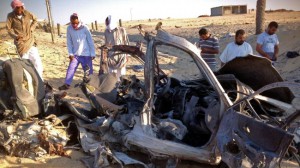 An Egyptian police brigadier general was killed in a roadside bomb attack on Wednesday in North Sinai, the interior ministry said, one of the most high-profile police deaths in the Islamist insurgency raging in the region.

The Interior Ministry spokesman said the roadside bomb hit a team of security forces on the al-Samarat road in the provincial capital of al-Arish. Brigadier General Ahmed Ibrahim was a deputy in the criminal investigations department in North Sinai. A police colonel was wounded in the attack.

There was no immediate claim of responsibility. Egypt is facing a Sinai-based insurgency that has killed hundreds of policemen and soldiers since the army toppled Islamist President Mohamed Mursi after mass protests against his rule in 2013.

The most active militant group is Sinai Province, which has pledged allegiance to Islamic State in Syria and Iraq, the Sunni group that has seized large parts of Iraq and Syria.