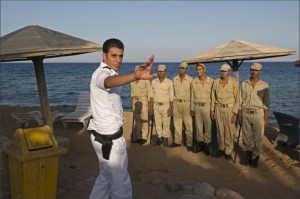 The Egyptian government announced a significant step forward in its commitment to the world to improve standards of airport security by appointing a leading international risk assessment company to review airport security in the country.

The Egyptian government has responded to the growing safety concerns globally making a major announcement in order to ensure a “gold standard” of world security, as part of its ongoing commitment to the Egyptian citizens, tourists, and business travelers. The decision follows other significant actions that have been undertaken recently to further enhance security throughout the country. The rich history of Egypt, its culture, the beauty of the sea all contribute to the tourism industry of the country which is a strategic pillar of the Egyptian economy. The country continues to improve and enhance its tourist facilities as a priority.

The Egyptian government is strongly committed to adopt the best practices in the world in all areas of government. In this context, HE Hisham Zaazou, Minister of Tourism, and HE Mohamed Hossam Kamal, Minister of Civil Aviation, held a press conference in Cairo and announced that after a rigorous selection of the largest international security and risk assessment companies, the Egyptian government has appointed Control Risks, a world leading company, to review with immediate effect airport security throughout Egypt.

HE Hisham Zaazou said: “Ensuring safe flights to all who come to Egypt, whether for work or pleasure, is a top priority of the Egyptian government. This is why we have taken immediate action to achieve a ‘gold standard’ of security worldwide. The Egyptian government is committed to ensure the best international consulting available organization to implement those changes effective immediately that will improve further our airport security. That is why we have designated Control Risks, a global leader in the field of risk assessment and security. All work will be performed with the highest level of transparency, with regular updates on progress.”

HE Captain Hossam Kamal, Minister of Civil Aviation, said: “All Egyptian airports apply international standards of safety. These measures are regularly checked by the authority for the Egyptian civil aviation, international organizations, and bilateral groups auditors, but we will make every effort to increase the level of confidence in our security procedures. The airline industry worldwide is facing numerous challenges; airport security is the most important priority, especially with the resurgence of terrorism in different parts of the world.

“Working with an international company that supports us in the evaluation and achievement of a ‘gold standard’ is a great opportunity for all of us. We have been long supporters of the introduction of international best practices to improve our standards. In fact, the international aviation sector is constantly changing for the improvement of standards and the adoption of best practices.”

The immediate objective will be the airports in Cairo and Sharm el-Sheikh. The process will then be extended to other airports throughout Egypt. The mandate is comprehensive and will examine the progress and improvements already made, as well as assess the procedures in place for safety, operations, equipment, access to airport operations, as well as training methods. Control Risks will present a full report to the Egyptian government, as well as detailed recommendations, a detailed program, and a timetable of actions to be implemented to ensure further improvements in Egyptian airports. Control Risks will facilitate the transfer of knowledge through providing the necessary training to Egyptian airport staff to operate according to the highest standards.

Control Risks will also collaborate with international delegations from different countries – including the UK, Germany, and Russia – who have worked closely with the Egyptian government to provide significant information regarding airport security.

Andreas Carleton-Smith, CEO of Control Risks for the Middle East and North Africa, said: “At a time of heightened concern over global security, the Egyptian government is adequately reviewing its airport security. To do so, Control Risks has been appointed to review the processes and the existing security measures in a number of key Egyptians airports. This is to help the Egyptian government to ensure that safety at these airports complies with international standards of best practices and governance. There will be an overall assessment, and this [will] foresee an extensive work already undertaken in recent months by the Egyptian government and international experts. We will begin work immediately in order to carry on this vital initiative.”