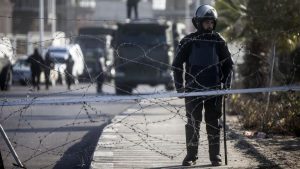 Six Muslim Brotherhood members have been killed in a shootout with Egyptian police on the outskirts of Cairo, the interior ministry said.

In a brief statement, the ministry said police exchanged fire with the “terrorist” group in 6 October City, on the southwestern edge of the capital, accusing it of “planning a series of terror operations.”

The announcement comes after rare protests against Egypt’s President Abdel Fattah el-Sissi broke out in several Egyptian cities on Friday and Saturday, with state media accusing the Muslim Brotherhood of influencing the protesters.

After the 2013 military overthrow of elected Brotherhood president Mohamed Morsi, the Islamist group was banned and deemed a terror group.

An ongoing wide-scale crackdown has jailed thousands of Islamists and the authorities regularly raid and kill armed affiliates of the banned group.

In a meeting with US President Donald Trump on Monday in New York, Sissi was critical of what he called “political Islam.”

Sisi led the military ouster of Morsi in 2013, becoming president the following year.

Asked about the small-scale protests last week, he said “the region will remain in a state of instability as long as there’s political Islam vying for power.”

He referred to the one-year rule of the Brotherhood in Egypt.

The Islamist group threw its support behind protests calling for Sissi’s removal in a Friday statement.