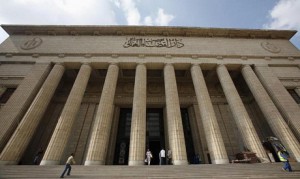 An Egyptian court sentenced 12 alleged Islamic State sympathisers to death on Thursday after convicting them of plotting attacks against police and troops in Egypt.

A key defendant in the case, Khaled Maghawry, is accused of “recruiting youths and sending them to Syria and Iraq to receive training [on jihadism] and how to use weapons.”

Six of the defendants are being tried in absentia while the rest are behind bars.

The court convicted them of “carrying out attacks on police and the military in Egypt” and joining the Islamic State group, which has seized large parts of Syria and Iraq and is expanding its presence in Libya.

Under Egyptian law, capital cases should be forwarded to the grand mufti, one of the country’s most senior figures, for consultation. His opinion, however, is not binding.

The court, in the northern governorate of Sharqiya, has set 12 September for a final ruling, which can still be appealed.

Egypt has been battling an Islamist insurgency in recent years, with numbers of attacks increasing dramatically since the 2013 ouster of Islamist president Mohamed Morsi.

The violence has mainly targeted police forces and the military, and is spearheaded by a militant group called Ansar Beit Al-Maqdis which swore allegiance to the Islamic State last year.