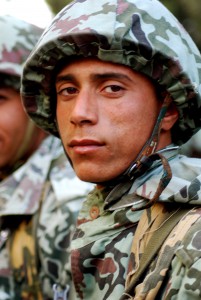 The Egyptian army has killed some 20 extremists and detained an additional 80 in the North Sinai peninsula, Egyptian Armed Forces announced Thursday.

Sinai is one of the most troubled provinces of Egypt in terms of extremist activity. Attacks became recurrent after the 2013 overthrow of President Mohammad Morsi and a subsequent crackdown on the Muslim Brotherhood movement.