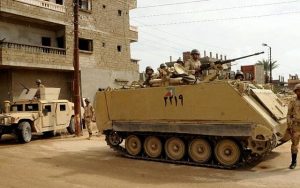 Egypt’s armed forces say they have killed three “high-level” suspected Islamist militants and arrested 74 others in sweeps in the troubled northern Sinai Peninsula in recent days.

Military spokesman Col. Tamer el-Rifai said in a Thursday statement that five four-wheel-drive vehicles and four bomb-making workshops were destroyed in the raids, as well as ammunition and fuel stocks.

Egyptian forces have been fighting a bloody insurgency by salafists linked to the Islamic State in the northern Sinai for several years, with near-daily bombings and shootings.

On October 13, the Egyptian army said six soldiers were killed in a gun and grenade attack on a security post near the North Sinai provincial capital of El-Arish.

A week later, 16 policemen were killed in a shootout with militants on the road between Cairo and the Bahariya oasis in the Western Desert in a rare flare-up outside the Sinai Peninsula.

Since 2013 when the army removed elected Islamist president Mohamed Morsi of the Muslim Brotherhood, extremist groups have increased their attacks on the military and police.

Hundreds of security forces and militants have been killed in Sinai in recent years, although exact numbers are unclear as journalists and independent investigators are banned from the area.

The Sinai-based IS offshoot also occasionally directs its aggression toward Israel, in what many analysts believe to be shows of strength and attempts to score propaganda points.

Last month, President Abdel-Fattah el-Sissi extended for a second time a state of emergency first declared after bombings claimed by IS in two churches that killed at least 45 people in April.