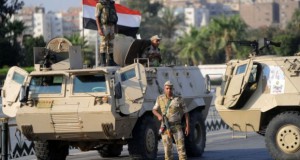 Egyptian army has killed nearly 30 militants over the past 24 hours during heavy clashes in northern Sinai Peninsula.

According to Press TV, a statement by the army said that a massive operation was launched in the cities of Rafah, Sheikh Zuweid, and al-Arish.

The operation was aimed at targeting militant groups in the area.

The Statement also confirmed that at least two military personnel were killed and several others injured when a military convoy was attacked in Rafah.

The assault was claimed by the ISIL-affiliated terrorists.

The Sinai has been the scene of violence after the overthrow of the country’s former President Mohammad Morsi in July 2013.