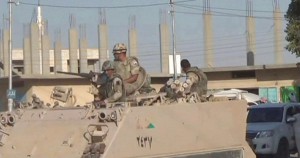 The Egyptian security forces killed 19 militants on Monday during massive raids in the Western Desert and the restive Sinai peninsula, the Egyptian military spokesman said.

Brigadier-general Mohamed Samir pointed out that 10 militants were killed and one was injured and arrested in the Bahariya Oasis region in the Western Desert and nine others were killed on the 15th day of a large-scale anti-terror campaign in North Sinai province.

“The forces managed to eradicate a highly-dangerous armed terrorist cell in the Bahariya Oasis region that plotted to carry out attacks during the upcoming Muslim Sacrifice Feast,” the military spokesman said in the statement.

A few days earlier, the Egyptian security forces killed 12 people including eight Mexican tourists by mistake while chasing militants with similar 4×4 vehicles near Bahariya Oasis in the country’s Western Desert.

In North Sinai, the forces arrested 17 suspects, destroyed 25 hideouts, 28 huts and dens, 14 motorbikes and seven vehicles belonging to the militants.

Monday’s raids in Sinai mark the 15th day of a large anti-terrorism operation that left hundreds of militants killed and a similar number of suspects arrested.

Last week, a police general was shot dead by unknown militants riding a vehicle and a soldier was also killed during a separate fire exchange with security forces in North Sinai.

Egypt has been suffering anti-government armed attacks that killed hundreds of security men since the military removed former Islamist President Mohamed Morsi in July 2013 in response to mass protests.

Earlier in August, a car bomb explosion targeting a national security building in Qalioubiya province near the capital Cairo left at least 29 people injured. The country’s prosecutor general was also assassinated in a car bomb in late June.

Most of the anti-government attacks were claimed by Ansar Bayt al-Maqdis group, which has changed its name to “Sinai State” and declared loyalty to the Islamic State (IS) regional militant group.

Continuous massive military operations in the peninsula have killed hundreds of militants as part of the country’s “war against terrorism.”