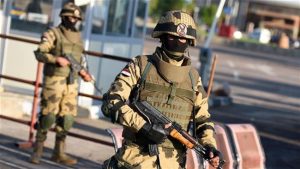 The Egyptian army announced that its troops have killed 12 terrorists in the terror-hit Sinai Peninsula in the past days, like reported by xinhuanet.com.

The Egyptian army launched several anti-terror operations in central and northern Sinai in cooperation with the Egyptian Air Force, the army’s spokesman said in a statement.

A terrorist was arrested during the operations in Sinai, where eight hideouts were discovered, the statement said.

A motorcycle, an explosive charge and weapons were seized by the army, it added.

The operations were conducted as part of the intensified efforts by the Egyptian armed forces to eradicate terrorism.

Egypt has been fighting against a wave of terrorism that has killed hundreds of policemen and soldiers since the military toppled former Islamist President Mohammed Morsi in 2013.

Terror attacks used to be centered in North Sinai before spreading nationwide and targeting the Coptic Christian minority as well. Most of the attacks were claimed by a Sinai-based terror group loyal to the regional militant group Islamic State (IS).

The Egyptian military and police have also killed hundreds of militants and arrested a similar number of suspects as part of the country’s anti-terror war.