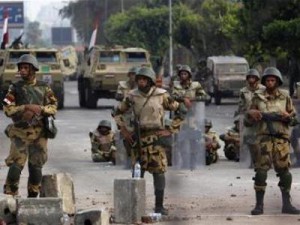 Egyptian army today foiled an attack on a military checkpoint by militants linked with the Islamic State terror group, killing two attackers and wounding five others in North Sinai.

The forces clashed with the militants who tried to attack the checkpoint in al-Gora village in Sheikh Zowayed, sources said, adding 15 militants were arrested during the clashes.

The militants belong to the Sinai-based militant group Ansar Beit Al-Maqdes, which changed its name to Sinai Province after it pledged allegiance to the Islamic State militant group, they said.

Egypt’s North Sinai has been the stage for many militant attacks since the January 2011 revolution that toppled the longtime president Hosni Mubarak.

The attacks targeting police and military increased after the ouster of Islamist president Mohamed Morsi in 2013 by military following massive protests against his rule.