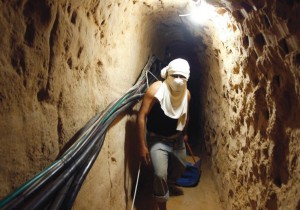 The Egyptian army has destroyed dozens of entry points to tunnels under the border with the Gaza Strip, which has been subject to an Israeli blockade for the past eight years.

According to Press TV, Army Spokesman Mohamed Samir wrote on Facebook on Saturday Egypt’s border patrol troops in the Sinai Peninsula ruined 69 entry points to the underground tunnels between March 28 and April 15.

Unnamed military officials said the tunnels were discovered and demolished in coordination with army engineers.

The presidential decree published on April 12 said “Anyone who digs or prepares or uses a road, a passage, or an underground tunnel in the country’s border areas with the purpose of connecting with a foreign entity or state, its citizens or residents… will face life in prison.”

According to the decree, those who are aware of such tunnels and refrain from informing authorities also face life in prison, which in Egypt amounts to 25 years behind bars.

The Egyptian government claims that it has destroyed vast numbers of such routes and has recently intensified efforts to demolish such underground passages which connect the restive Sinai Peninsula to Gaza.