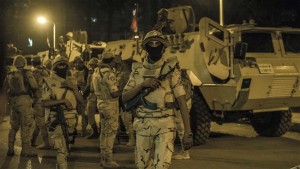 Egypt’s army killed 14 militants in an exchange of fire during a raid in central Sinai, the military spokesman said in a statement according to albawaba.com .

According to a statement published on Egypt’s army spokesman Facebook page, the military arrested 10 other militants. Three car bombs and 10 explosive devices were destroyed and weapons and communication devices were seized by the military.

Militancy inside Egypt has seen a significant rise since the military ouster of former president Mohamed Mursi of the Muslim Brotherhood in July 2013, following mass protests against his rule.

Most of the insurgent activities which target security personnel and facilities occur in the restive Sinai peninsula, particularly in North Sinai.

The group known as “Sinai Province”, affiliated with Daesh fighters in Syria and Iraq (ISIS), claim most of the attacks in this area.

According to separate statements by the armed forces, hundreds of suspected militants have been killed and hundreds were arrested in multiple security campaigns launched by the army over the past two years.