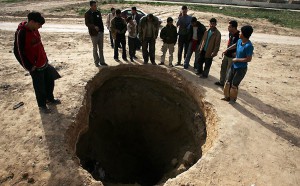 Some 521 tunnels have been blocked between Egypt and the Gaza Strip, including 63 which range from one to 2.8 kilometres from the border, the Egyptian army revealed yesterday.

The report covering the period from October 2014 to April 2015 also revealed that border guards arrested 6,004 people, both Egyptians and of other nationalities, who were trying to sneak out of the country.

Additionally, the report said 6,097 weapons were seized. They included automatic pistols, submachine and standard guns, as well as rifle cartridges.