You are here: Home / Mediterranean / Egypt votes to deploy troops to Libya 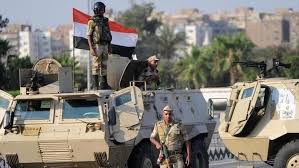 Egypt’s parliament has approved a motion to deploy troops to Libya in a move that could escalate its civil war.

The house of representatives voted on Monday to “defend Egyptian national security in the strategic western direction against … armed criminal militias and foreign terrorists.”

President Abdel Fattah el-Sissi has called the coastal city of Sirte a “red line” and warned that should troops aligned with the Tripoli-based Government of National Accord (GNA) attack the city, Egyptian forces will march across the border.

Libya has been at war since Nato powers helped jihadist rebels overthrow the Muammar Gadaffi government in 2011.