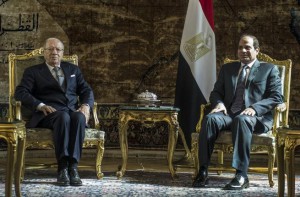 In a joint press conference in Cairo, Sisi said that Egypt will coordinate with Tunisia “to combat terrorism” and expressed his support for the procedures taken by the Tunisian government to preserve the country’s security.

Essebsi arrived in Egypt on Sunday and met with his Egyptian counterpart as well as Arab League Secretary General Nabil al-Araby.

The two leaders discussed bilateral relations and regional issues including the situation in Libya and Syria.

Both countries also expressed their aspirations for Libyan parties to accept the UN sponsored agreement to bring together Libya’s warring factions.

On Syria, the two presidents agreed on the importance of working towards a political settlement to maintain the unity and peace of Syria.

Sisi praised the results of the 15th session of Egyptian-Tunisian joint high committee meeting which was held in September, in which Former Prime Minister Ibrahim Mehleb’s cabinet signed 16 memoranda of understanding and protocols.