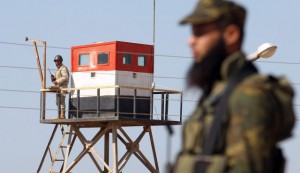 Thirty Egyptian tribes based in Sinai yesterday said they would confront militant groups including an Islamic State affiliate that has killed hundreds of soldiers and police, in a boost to Egypt’s efforts to improve security.

The Sinai Tribal Federation said it had held its first meeting to discuss ways to tackle militants seeking to topple the government.

The tribes would work ‘in co-ordination with the relevant agencies and institutions of the formal state … to support the state and the armed forces in their war against terrorism’. the alliance said in a statement.

Separately, suspected militants set off three small bombs outside the Cairo home of an Egyptian judge who sentenced Islamists to death, wounding four people and damaging the building, police said.

Judge Mutaz Khafagi, who had also sentenced Muslim Brotherhood leader Mohamed Badie to life in prison, was not injured in the explosions, a police official said.

Meanwhile, an Egyptian judge ordered the detention of a policeman on trial for the January killing of an unarmed female protester taking part in a peaceful demonstration in Cairo.