You are here: Home / Africa / Egypt to establish military base in Eritrea

The Red Sea nation had allegedly granted Egypt green light to build a military base within the country’s territory, like reported by sudantribune.com 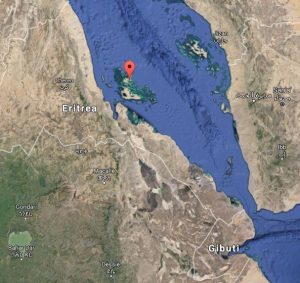 Asmara has allowed Cairo to acquire a military base in Nora locality at the Dahlak Island for an indefinite period of time.

The agreement, RSADO further said, comes in the wake of last week’s high-level visit of the Egyptian delegation to Eritrea.

An estimated 20,000 to 30,000 Egyptian naval forces will be deployed at the planned base, officials from the group hinted.

As it had long been anticipated and if true, Egypt will be Africa’s first and third Arab country to build a military facility in the reclusive East African nation, currently under United Nations sanctions for arming and financing Al-Shabab, a terrorist group allied with al-Qaeda.

According to previous U.N reports, Eritrea has already leased its port town of Assab to Saudi Arabia and the United Arab Emirates (UAE) to establish military bases to ease their coalition battle against Houthi rebels in Yemen.

Concerned by Saudi and UAE military presence in Eritrea, Ethiopia warned the two Arab nations against supporting what it said was “Asmara’s long-standing destabilizing agenda against Ethiopia”.

Recently, Egyptian leaders have reportedly been engaged in diplomatic efforts for regional countries including Somalia, Somaliland and Djibouti to grant them military and commercial base in their selected soil. However, none of Cairo’s efforts were reportedly successful, prompting the opposition group to disclose this matter.

“Egyptian leaders’ motive to have a military base in the soil of rival Eritrea is to sabotage construction of Ethiopia’s mega dam project by supporting Eritrea sponsored anti-Ethiopian elements and al-Qaeda allied Somali militant group,” Mulgeta told Sudan Tribune.

“Egypt is conspiring with Eritrea to subject Ethiopia engage in proxy war with its enemy Eritrea, local armed opposition groups and further with al-Shabaab”, he added.

Meanwhile, despite the various U.N reports, Eritrea has previously dismissed revelations that it has leased lands for foreign countries.

Relations between Ethiopia and Eritrea has remained odd after 1998-2000 border war, which killed an estimated over 70,000 people.