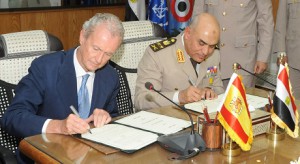 The memorandum included the “exchange of experience” and “joint training” between both countries, according to the Facebook post.

A number of officials, including Egyptian army chief of staff Mahmoud Hegazy, attended the Tuesday meeting.

Both countries have also agreed to study the feasibility of a high-speed train link between Cairo and Luxor, in the south of Egypt.