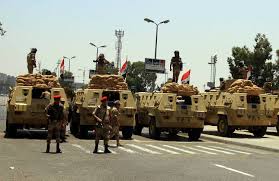 Egyptian President Abdel Fattah al-Sisi extended the state of emergency in place in parts of North Sinai for three months, the presidency said on Saturday.

The extension will come into effect starting Sunday.

The president declared a state of emergency and a curfew in the border governorate last October, in reaction to a militant attack which left over 30 security personnel killed.

As part of Sisi’s extension, the night-time curfew will continue to be enforced in the areas where there is a state of emergency.

Security forces are currently on alert in North Sinai in anticipation of any possible “terrorist” attacks, since today coincides with the Sinai Liberation Day, security sources said.

The Sinai peninsula was liberated from Israeli control in 1982 but is currently at the epicentre of militancy which has surged since July 2013, particularly in the northern part.