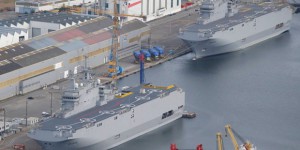 Egypt signed a contract on Saturday to buy two Mistral warships, whose sale to Russia Paris cancelled because of the Ukraine crisis, a delegation member with the visiting French prime minister said.

On September 23, French President Francois Hollande announced he had agreed the sale with his Egyptian counterpart, Abdel Fattah al-Sisi. The deal was the second major military contract in 2015 between France and Egypt, which Hollande said he increasingly views as a strategic partner.

French government sources had said Cairo would pay $1 billion for the vessels, with “significant” Saudi financing. The two warships, which can each carry 16 helicopters, four landing craft and 13 tanks, were ordered by Russia in 2011 in a 1.2-billion-euro deal.

After Prime Minister Manuel Valls and Sisi met in Cairo on Saturday, a member of the French premier’s delegation said the deal for the two Mistrals had been signed. France found itself in an awkward situation in 2014 as ties between Russia and the West deteriorated over Moscow’s annexation of  and support for separatists in eastern Ukraine.

Paris decided to cancel the delivery in an expensive decision, as it had to foot a bill of more than one billion euros for the ships’ upkeep and the cost of training 400 Russian sailors to crew them. After months of intense talks, Paris and Moscow agreed on the reimbursement of the original deal in August, with Paris returning 949.7 million euros that Russia had already paid.

The Mistrals contract with Cairo comes after Egypt became the first foreign buyers of France’s Rafale fighter jet, agreeing to purchase 24 in February, in what Paris hailed as “historic” accord. Valls arrived in the Egyptian capital Saturday at the start of an Arab tour that will also take him to Jordan and Saudi Arabia.