You are here: Home / Mediterranean / Egypt sentences 10 Islamists to death 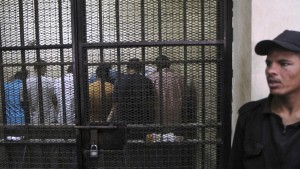 An Egyptian court on Monday handed preliminary death sentences to ten Islamists on charges of setting up a group linked to Al Qaida, legal sources said.

The Cairo Criminal Court will send the rulings to the country’s chief Islamic authority, the mufti, to approve or reject as required by Egyptian law, they added.

The final verdict will be announced on September 27.

On that day, the court will also deliver rulings for 58 co-defendants, including the brother of Ayman Al Zawahiri, the Al Qaida chief, in the same case.

Mohammad Al Zawahri and the other defendants are charged with forming a terrorist group linked to Al Qaida to target security forces and the Christian minority, as well as planning terror operations following the army’s 2013 overthrow of Islamist president Mohammad Mursi.

Eighteen of the accused are being tried in absentia in the hearings that started in June last year.

He fought against the Soviets in Afghanistan in the 1980s. He was detained and extradited to Egypt where he was imprisoned until he was released following the 2011 uprising that brought Islamists to power.

Egypt rearrested him in August 2013 as part of a relentless crackdown that has targeted Islamists since Mursi’s overthrow.