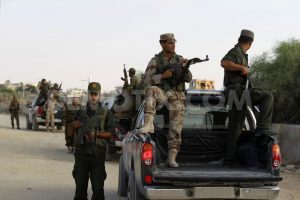 Egyptian officials say security forces have killed 11 men armed with assault rifles in a firefight that began during a dawn raid on a desert cave south of Cairo, like reported by abcnews.go.com.

The officials say the men killed Wednesday had been in possession of weapons and ammunition, including explosives, in the Western Desert near the Farafra depression, and had planned “hostile operations.” The area is near the city of Assiut, some 320 kilometers, or 200 miles, from Cairo.

The officials were not identified in their statement but spoke anonymously under government regulations.

Egypt launched a nationwide operation against militants in February. It has struggled to combat a long-running insurgency in the Sinai Peninsula that is now affiliated with the Islamic State group, and which has also carried out attacks on the mainland.