You are here: Home / Mediterranean / Egypt: security forces kill 70 militants in North Sinai over the past 48 hours 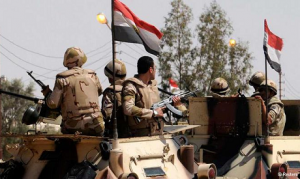 No less than 70 militants were killed in North Sinai by Egyptian security forces over the past 48 hours following a deadly attack by the Islamic State-affiliated Ansar Beit Al-Maqdis on the city of Sheikh Zuwied, state-owned MENA reported.

The sources revealed that among the militants who were killed on Thursday was leading Ansar Beit Al-Maqdis figure Kamal Allam.

On Wednesday, North Sinai witnessed the largest terrorist attack of its kind by ABM militants where battles between the Egyptian armed forces and militants continued for several hours in the Sheikh Zuwied area.

Battles between Islamist militants and the Egyptian army in North Sinai left at least 117 people dead — 17 army soldiers and 100 militants, according to official statements by the Egyptian armed forces.