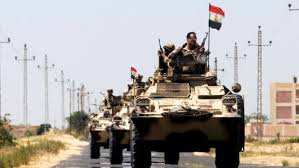 Egyptian security forces killed 52 Islamic terrorists in Sinai as they continue their crackdown against extremists in the peninsula.

The military said on Monday that 52 “takfiris” were killed in two separate operations by security forces in the restive peninsula.

Three soldiers were killed in the operations, it revealed.

It did not disclose when the operations took place.

Terrorists in Sinai intensified their attacks after the ouster of Muslim Brotherhood President Mohammed Morsi in 2013.

The military launched a sweeping operation in February focused on the Sinai in eastern Egypt aimed at wiping out terrorists, including an ISIS affiliate.

According to official figures, a total of more than 350 suspected terrorists and at least 30 soldiers have been killed in the Sinai 2018 campaign.

Security sources said last week that local ISIS leader Abu Hamza al-Maqdisi had been killed in an air raid on the Sinai. The group confirmed his death.