You are here: Home / Europe / Egypt, Russia call for coalition to stop terrorism 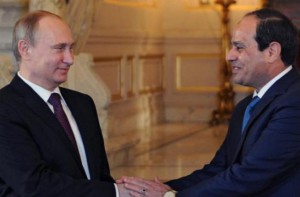 Opening a meeting with Putin in Moscow, Sisi said “the Egyptian people” are hoping for broader ties with Russia in all areas, particularly in fighting terrorism in the Middle East.

Sisi’s visit, his second in the past three months, highlights Moscow’s attempts to expand its influence in Egypt at a time when Egyptian-US relations have soured in the aftermath of the ouster of Islamist President Mohammad Morsi.

Putin told reporters after the talks that regional powers should join their efforts to combat ISIS.

“[We] have underscored the vital importance of setting a counterterrorism front to include key international players of the region including Syria,” he said.

Putin and Sisi were also expected to hammer out the details of a joint project to build Egypt’s first nuclear power station but Putin told reporters Wednesday that experts from both countries are still working on it.

France is in talks to sell two Mistral helicopter carriers to Egypt after their sale to Russia was canceled earlier this month, two sources close to the matter said Wednesday.

Cairo has sought to boost its military power in the face of a two-year-old insurgency based across the Suez Canal in the Sinai Peninsula and fears the crisis in neighboring Libya could spill over. Egypt’s allies are also keen to burnish its image in a region beset by turmoil.

“There are indeed discussions that are relatively advanced to take the two Mistrals,” one French source close to the matter said. “It’s Egypt.”

The source said if there were a deal it would likely be financed in part by money from Gulf Arab states, which consider Sisi a bulwark against the now-outlawed Muslim Brotherhood movement.

Egypt and Saudi Arabia, which are part of a coalition fighting Houthi rebels in Yemen, agreed at the end of July to work together to create a joint Arab military force, including defining their maritime borders along the Red Sea.

A second French source confirmed the talks, but said the financing was unclear.

France, whose navy already operates three Mistral helicopter carrier warships, has no use for the two ships and will have to pay Russia less than 1 billion euros ($1.14 billion) for canceling the contract, the French government spokesman said Wednesday.

The Mistral is known as the Swiss army knife of the French navy for its versatility.

President Francois Hollande said Tuesday there were a number of potential buyers for the carriers. Sources told Reuters earlier this month other countries interested included Brazil, Singapore, Malaysia and Canada.

“France has chosen to consider Egypt as a major player in the Middle East,” Hollande said Tuesday in an annual foreign policy speech. “Its stability is essential, and Egypt expects a lot from France.”

Last year, Egypt bought four small Gowind warships, built by Mistral manufacturer DCNS, which is 64 percent owned by the French state and 35 percent by defense group Thales. It also acquired a Fremm frigate as part of a 5.2 billion euro contract for 24 Rafale warplanes earlier this year.

DCNS and the French Defense Ministry declined to comment Wednesday.