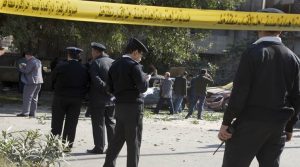 An Egyptian police officer and two conscripts were killed and 10 wounded on Tuesday by a roadside explosive in the restive Sinai Peninsula, security and medical sources told Reuters.

Lieutenant Colonel Tamer Shaheen of the Central Security Forces and two of his men were killed in the south of Arish, the capital of North Sinai province, when their armored vehicle drove past a roadside bomb, the sources said. The wounded were taken to Arish military hospital.

State television confirmed an officer and two conscripts were killed but did not state their ranks or names and did not mention any wounded. There was no immediate comment from the Interior Ministry.

Egypt faces an Islamist insurgency led by Islamic State in North Sinai, where hundreds of soldiers and police have been killed since 2013, when the military ousted Islamist president Mohamed Mursi after mass protest.

Islamic State has also increasingly carried out attacks in the mainland on security forces and Coptic Christian civilians in recent months, killing around 100 Copts since December.

The security sources said Islamic State was most likely behind the attack and that militants had planted the explosive and detonated it remotely once the armored vehicle drove by. There was no immediate claim of responsibility.