You are here: Home / Mediterranean / Egypt rejects Saudi label of Hezbollah as a terror organization

In an interview with al-Youm al-Saba’a, Shoukry evaded answering a question on whether Hezbollah is a terrorist organization, stating that the Lebanese people should judge on that issue. 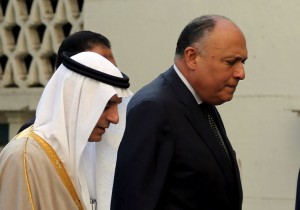 Egyptian Foreign Minister Sameh Shoukry has refused to label Hezbollah as a terror organization, explaining that “this issue is to be decided by the Lebanese people.”

In an interview with the Egyptian daily newspaper al-Youm al-Saba’a, Shoukry evaded answering a question on whether Hezbollah is a terrorist organization, stating that he is not authorized to judge on the issue.

“Hezbollah’s agenda focuses on Lebanon, which is an Arab sister state that faces great internal instability. The Lebanese people are the one to judge whether Hezbollah is a terror organization or not, “Shoukry said.

In light of the Arab League’s recent decision to designate Hezbollah a terrorist organization, Shoukry argued that “the Arab League’s decision is related to Hezbollah’s behavior, describing it as terror. However, the international community has not yet reached an agreed definition of ‘terror.'”

Shoukry’s remarks demonstrate the ongoing rift between Egypt and Saudi Arabia regarding Hezbollah, amid the upcoming visit of Saudi King Salman bin Abdulaziz to Cairo in April.

Nevertheless, the foreign minister stated that Egypt’s relations with the Saudi kingdom are very good, adding that the level of communication between the leaders of both states is very high.

Relating to the Syrian conflict, Shoukry argued that while both states are members of the Syrian Support Group, they do have controversy regarding the political solution to the conflict.

“While the kingdom has long been advocating for Assad’s removal, we do not lay out such conditions because we do not think it is our role to support one of the sides in the political equation in Syria,” Shoukry said.