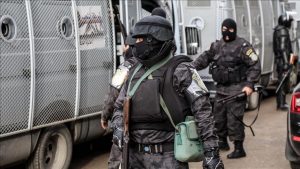 Egyptian police killed eight people in a shootout west of Cairo on Sunday, according to the country’s interior ministry.

The ministry said the eight were killed during a raid on their training camp in Fayoum province.

The statement said the eight were members of Hasm group, which the authorities links to the Muslim Brotherhood and blames for a string of attacks in recent months.

The Brotherhood denies any relation to Hasm and has repeatedly denounced violence.

Egypt was roiled by violence when the military deposed Mohamed Morsi, Egypt’s first freely elected president and a Brotherhood leader, in a 2013 coup.