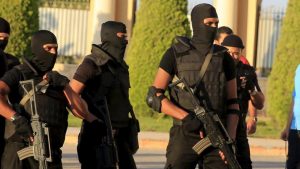 Egypt’s Interior Ministry says police killed six Islamic militants in a shootout in a Cairo suburb, like reported by dailymail.co.uk.

Monday’s statement says the fighting erupted when police raided a suspected militant hideout in the suburban Sixth of October district.

The statement says police seized weapons during the raid. It didn’t say when the raid took place or whether any security forces were killed or wounded.

Egypt, which has been under a state of emergency since April last year, has been battling Islamic militants for years, but the insurgency gained strength after the 2013 overthrow of elected but divisive Islamist President Mohammed Morsi. The militants have mainly targeted security forces and Christians.

In February, Egypt launched a major security operation against militants, mainly in the Sinai Peninsula but also elsewhere in the country.