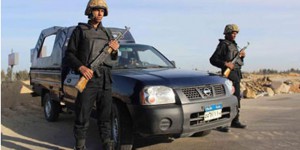 Five people affiliated with the banned-Muslim Brotherhood group were killed Thursday in a fire exchange with police forces, which raided their “hotbed” in Fayoum city, southwest of Cairo, Youm7 reported.

In a security campaign in Abu Naour Village in the city, counter-terrorism forces targeted the location in nearby farms to arrest a number of assailants accused of engaging in violence. An anonymous security source at the Ministry of Interior told Youm7 that the killed people were members of a “specialized operations committee” that belongs to the Brotherhood.

The bodies were transferred to the morgue, and investigations are being carried out to verify whether the killed assailants partook in the recent killing of four-year-old girl Jessy, the daughter of Lieutenant Sherif Samy.

This is not the first time the Egyptian police have killed alleged militants in a location reported to the police as a hideout for militants.

Two men who allegedly belong to the militant group Ajnad Misr (Soldiers of Egypt) were killed July 27 in confrontations with police forces in an apartment in a Giza suburb.

On July 1, police forces killed nine Brotherhood members in an apartment in Giza’s 6 October city after they opened fire on the forces, according to a Ministry of Interior statement. The ministry said it had received intelligence information the group was planning to carry out “terrorist attacks.”