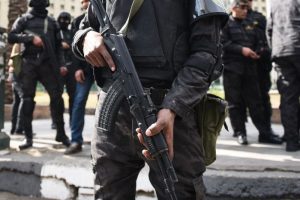 Egyptian policemen on Tuesday shot and killed three wanted militants from the extremist Hassam group in a shootout in the coastal city of Alexandria, the interior ministry said like reported by jordantimes.com.

A statement said the suspects were wanted by authorities and were “among the most prominent leaders” of the militant group.

Hassam has claimed responsibility for several assassinations and attacks in Cairo and the Nile Delta.

The ministry said security forces had approached a hideout of the militants in Alexandria and that the suspects opened
fire at them.

The ministry said the Hassam group is part of the outlawed Muslim Brotherhood of Mohamed Morsi, the Islamist president toppled by the military in 2013.

The brotherhood emerged from the 2011 uprising that unseated former president Hosni Mubarak and won a series of elections ending with Morsi’s 2012 presidential victory.

Since then, an extensive crackdown on the group has left it in disarray with competing wings that have disagreed on whether to use violence, after police quashed their protests.

Most attacks in Egypt have been carried out by the Daesh terror group, which views the brotherhood as heretics.

But over the past year, Hassam and Lewaa Al Thawra claimed several attacks and bombings that targeted police officials and judges.

The groups have not announced their affiliation to the brotherhood in any statements.