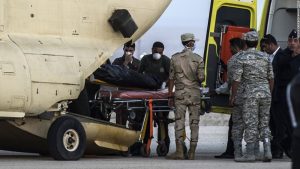 An Egyptian military officer was killed and two others were wounded in a missile attack that was launched against a military airport in Sinai northern town of Al-Arish, the Egyptian army announced according to middleeastmonitor.com.

According to the army’s spokesperson, Col Tamer El-Rifai, the attack also caused partial damages to an armed forces helicopter.

The attack took place during a visit by the Egyptian ministers of interior and defence to Al-Arish.

“Military officers immediately dealt with the source of the smoke plume seen coming from the airport and taped off the surrounding area for further investigation,” El-Rifai added.

Egypt has been battling an entrenched Islamist insurgency for several years in North Sinai, with hundreds of security forces killed in the attacks.