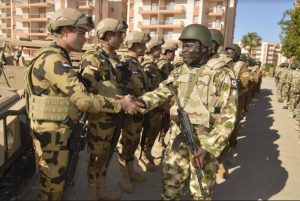 Egyptian officials are quietly visiting countries in the African Sahel region, sources say, where they are offering military support in an attempt to curb Turkish influence, like reported by alaraby.co.uk.

During the visits, Egypt provided military support including training and funding to the armed forces of Chad and Niger, the sources said.

The efforts have received support from France – the former colonial power in both countries – and Germany, the Egyptian sources claimed.

Egyptian officials hope to counter the growing Turkish influence in the region.

Cairo and Ankara have been engaged in a regional rivalry since the 2013 military coup that toppled President Mohammed Morsi – Egypt’s first democratically-elected president.

Turkey has in recent years expanded its presence in Africa through aid, trade, diplomatic and military initiatives.

Ankara has a stated goal to open an embassy in every country on the continent – it currently has embassies in 42 countries, with two more planned in Togo and Guinea-Bissau, up from 12 in 2009.

Most prominent is Turkey’s humanitarian efforts on the continent, with Somalia the largest recipient of aid from Ankara.

The initiative has also seen Turkey open a military base in Somalia, as well as in Libya where Turkish forces last year intervened to back the UN-supported government against rogue commander Khalifa Haftar, who is backed by Egypt, the UAE and Saudi Arabia.

There has been speculation that Ankara seeks to establish a military base in Niger near the Libyan border, although those reports have not been substantiated at this time.

Turkey’s friendly relations with Chad have soured due to the country’s support for Haftar, although Ankara has continued to provide N’Djamena with aid during the coronavirus pandemic.