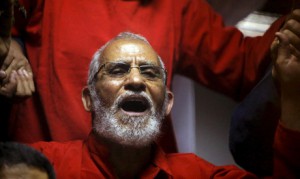 In the case, dubbed as “Suez events” by the media, which involves 199 defendants, the court sentenced 56 defendants said to be supporters of former president Mohamed Mursi to high security imprisonment of 3 to 7 years.

The court also handed life imprisonment to 90 defendants in absentia and 50 others were acquitted.

The verdict is subject to appeal.

The public prosecution accused the defendants of inciting violence and rioting in the province of Suez following the dispersal of Rabaa al-Adaweya and Nahda square sit-ins in August 2013.

In the aftermath of the dispersals, violence broke out in several parts of the country. In Suez, at least 30 people were killed in the violence, dozens of military personnel were injured and a military vehicle and several churches were set ablaze.

Mursi and Badie are among several leading Brotherhood figures who have been put on trial after the July 2013 ouster of Mursi after mass protests against his rule.

Egypt listed the Brotherhood as a terrorist organisation in December 2013 and insists it is behind the wave of militancy which has targeted security personnel since July 2013.