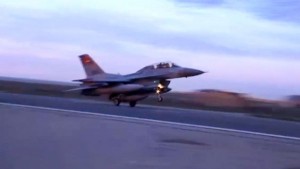 The Egyptian military has launched airstrikes on “terrorist positions” in the Sinai peninsula “to avenge the blood” of its soldiers killed in an attack on a military checkpoint Friday, according to an army statement.

While the military did not specifically name the group, ISIS claimed responsibility for Friday’s attack that left at least 12 soldiers and 15 of the assailants dead.

It’s the latest attack in a battle for control over the Sinai peninsula between Islamist militants and Egyptian forces.

Militancy in the Sinai increased dramatically after the army toppled President Mohammed Morsi of the Muslim Brotherhood in 2013.

In August, the military said it had killed a key ISIS-allied leader in the region, along with dozens of his fighters.