You are here: Home / Mediterranean / Egypt Kills 63 Jihadists in the Sinai 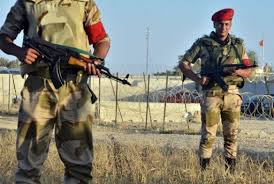 The Sinai has recently witnessed some of the heaviest fighting between security forces and Islamists since the army ousted President Mohammed Morsi of the Muslim Brotherhood in 2013.

Security sources said on Sunday that troops killed the 63 in villages between the towns of Sheikh Zuweid and Rafah, Reuters reported.

The army found four hideouts and attacked them with Apache helicopters and ground troops. It also attacked vehicles belonging to the militants, the security sources added.

Among the attacks claimed by the group since Morsi’s ouster was the assassination of a top Egyptian police general, who was gunned down as he left his home in a west Cairo neighborhood, and a bus bombing on a tour bus filled with South Korean tourists in the Sinai.

Though the vast peninsula has long been a security headache for Egypt and its neighbors, the removal of Morsi brought new violence that has grown into an Islamist insurgency that has spread out of the region.

Just last week, the Islamists carried out a multi-pronged attack in which some 50 Egyptian soldiers were killed.

Egyptian government officials have accused Morsi’s Muslim Brotherhood of links to Sinai attacks. The Brotherhood says it is a peaceful movement that wants to reverse what it calls a military coup through street protests.

Egypt’s interior ministry said on Sunday it had arrested 12 Brotherhood members who had formed three cells with the intention of carrying out attacks on policemen, soldiers and military and police bases, according to Reuters.

On Saturday, Egyptian President Abdel-Fattah Al-Sisi said that Egypt had foiled an attempt by the Islamic State (ISIS) group to seize territory and set up an extremist state in the Sinai.

Sisi praised Egyptian troops for “foiling a very big plan” and added, “No one can impose on the Egyptians something they don’t want. To reach the Egyptians they have to pass through the army, the sons of Egypt.”