You are here: Home / Mediterranean / Egypt kills 22 islamic terrorists in the Sinai 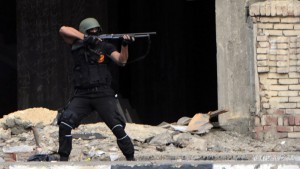 The sources said security forces struck a group of people meeting outside a mosque south of the town of Sheikh Zuwayed who were planning an attack on security points.

They also targeted a vehicle with four militants and two more riding a motorcycle, the report said.

Terrorists had planted two bombs in two adjacent houses, both inhabited by police, the sources were quoted by Reuters as having said. The force of the explosions led to the collapse of large parts of the homes, injuring three policemen and five civilians.

The extent of their injuries was not immediately clear.

Egypt is facing a Sinai-based insurgency that has killed hundreds of policemen and soldiers since the military toppled Islamist President Mohammed Morsi in July of 2013.

Sinai Province, a group affiliated with the Islamic State and formerly known as Ansar Bayt Al-Maqdis, has claimed responsibility for most of the terrorist attacks in the Sinai over the last few years.

Among the attacks claimed by the group since Morsi’s ouster was the assassination of a top Egyptian police general, who was gunned down as he left his home in a west Cairo neighborhood, and a bus bombing on a tour bus filled with South Korean tourists in the Sinai.

Most recently, members of the group killed two Egyptian judges and a prosecutor in the Sinai, in an attack which came hours after a court in Cairo sentenced Morsi to death for his role in a mass jailbreak during the 2011 uprising.

The leader of Sinai Province later called on the group’s followers to continue to attack local judges.