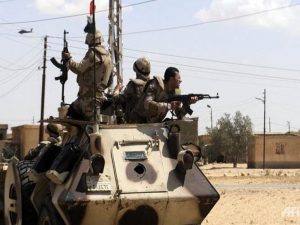 A militant group was “planning hostile acts targeting military and police forces…in order to destabilise national security”, the ministry said in a statement.

It did not name a specific group, but said “terrorist elements” had been hiding in a farm in El-Arish, the capital of North Sinai province.

When forces approached, “the militants shot live rounds forcing troops to deal with them (and) leading to 15 deaths”.

Graphic pictures of the bodies of the alleged militants were sent along with the Sunday press release.

Authorities also said they found a small trove of stashed weapons including an explosive belt, several rifles and an explosive device.

The ministry did not specify when the reported shootout took place, but Sunday’s announcement follows recent military operations in Sinai that authorities say killed 118 suspected militants.

Nine soldiers were killed and one wounded in those “counter-terrorism” operations, a military statement said on Friday.

President Abdel Fattah al-Sisi paid tribute to the dead personnel in a series of tweets late Friday, describing “terrorism” as a “cancer still trying to kidnap the nation”.

In February 2018, Egypt’s military launched a nationwide offensive against Islamist militants, focused mainly on North Sinai, where the Islamic State group still has a significant presence.

Some 665 suspected militants and around 60 soldiers have been killed since, according to official figures.