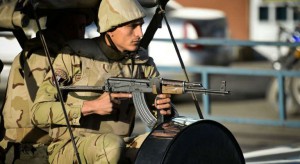 Egypt’s military killed 241 militants in the Sinai from July 1-5, the army said Monday, including jihadists from the Islamic State group who launched spectacular attacks last week.

The military has poured troops and armour into the peninsula where security forces have been fighting an Islamist insurgency since then army chief and now President Abdel Fattah al-Sisi ousted president Mohamed Morsi in July 2013.

On July 1, jihadists from IS launched blistering attacks in the North Sinai town of Sheikh Zuweid – the scene of regular militant attacks – in which dozens were killed.
The military said 21 soldiers were killed in those attacks, after several media outlets reported higher tolls from security officials.
In figures released on Monday by the army spokesman on his Facebook page, the military said its forces killed 241 militants between July 1 and 5.

Sixteen crude bombs were detonated, while 26 cars and 28 motorbikes belonging to militants were destroyed over the same period, the army said.

On Facebook, the army also posted photographs of dead militants, some even displayed on military tanks.

On Saturday, Sisi made a surprise visit to North Sinai, where in an address to troops at a camp whose location was not disclosed he said the region was now “totally stable”.

The jihadists say their attacks are in response to the bloody repression launched by the authorities after Morsi’s ouster, which has seen at least 1,400 people killed and thousands more jailed.

Most of the attacks on the security forces are claimed by a group calling itself “Sinai Province”.

Formerly known as Ansar Beit al-Maqdis, it changed its name when it pledged allegiance to IS last November.