You are here: Home / Europe / Egypt, Italy and Algeria to discuss Libya in Cairo 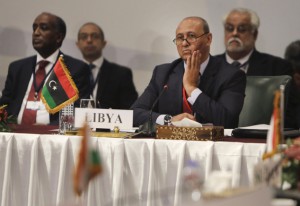 A tripartite ministerial meeting between Egypt, Italy and Algeria to discuss the ongoing Libya crisis is scheduled to take place in Cairo on Sunday, the second meeting of its kind since April.

Following the ouster of long-time dictator Muammar Gaddafi, various Libyan militias have been fighting the central government in a civil war that has ravaged the country.

In April, the first meeting was held between the three countries in Rome to discuss possible solutions to end the Libyan crisis.

An internationally-recognised parliament currently operates out of the city of Tobruk in the east, while anti-government rebels control the capital Tripoli in the west.

The three countries share an interest in ending the Libyan conflict.

Both Egypt and Algeria share a border with the war-torn country.

In February, Egypt launched airstrikes against Islamic State group (IS) targets in Libya, in coordination with the Libyan army, in retaliation for IS’s killing of 20 Egyptian Copts.

Italy has witnessed a large influx of migrants who arrive by boats. It also fears the chaos in Libya could help jihadists establish a stronghold from which they could launch attacks on European soil.