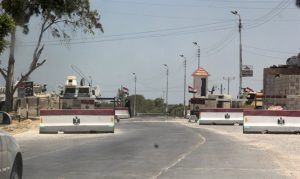 An Islamic State (ISIS) suicide bomber attacked a tribal checkpoint in Egypt’s Sinai Peninsula on Tuesday, killing four members of a powerful local tribe and wounding others, Egyptian security officials said, according to The Associated Press.

The attacker, driving a car filled with explosives, struck a checkpoint near the town of Rafah that was manned by members of the Tarabeen tribe, said the officials, who spoke on condition of anonymity.

Egyptian forces have been battling a growing insurgency in the northern Sinai for years. Most of the attacks in the region have been claimed by the Sinai Province, which pledged allegiance to ISIS in 2014.

Earlier this month, an Egyptian army air strike killed one of the founders of Sinai Province.

Local tribes have mostly remained on the sidelines of the fighting between the Egyptian army and the Sinai terrorists, noted AP.

The tribes have long resented the heavy-handed security crackdown in the region and relations with the Cairo government have been poor.

However, clashes erupted last week between jihadists and local tribes after ISIS fighters shot at a truck smuggling cigarettes into an area where the extremists have banned tobacco, according to AP.

Earlier this month, militants kidnapped the head of another powerful tribe, El-Fawakhriya, and a prominent businessman from the tribe.