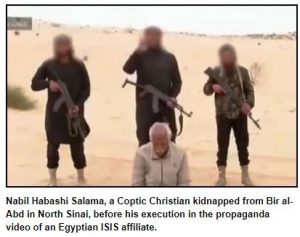 In a video released last Saturday, April 17, Muslims connected to the Islamic State executed a Coptic Christian man in Sinai, Egypt, like reported by meforum.org.

The slain was identified as 62-year-old Nabil Habashi Salama. In the video, Salama appears on his knees, with three masked men holding rifles standing behind him. The one in the middle launches into a typical jihadi diatribe:

“All praise to Allah, who ordered his slaves [Muslims] to fight and who assigned humiliation onto the infidels” — this latter part is said while the terrorist contemptuously points at the bound and kneeling man before him — “until they pay the jizya while feeling utterly subdued.”

The middle speaker continues by threatening “all the crusaders of the world” — a reference to Christians in the West — while singling out the countrymen of the one about to be slain: “as for you Christians of Egypt, this is the price of your support for the Egyptian army.”

The speaker then points his rifle at the back of the Christian’s head — even as chants of “jihad! jihad! jihad!” blare out — and fires at point-blank range, killing him.

It is unclear when the video was made — Salama was abducted over five months earlier — and the timing of its release appears to have been meant to coincide with Easter, which for Copts and other Orthodox communities is just beginning. (As discussed here, Muslim terrorists have a penchant for killing and terrorizing Christians and bombing their churches during their holiest days, especially Easter, most recently in Indonesia.)

According to the original report, on November 8, 2020,

[Salem had gone out] at 8pm to buy something from a nearby store, when three armed unmasked men stopped him by force in the middle of the busy street. They forced a passing pickup truck to stop, threatened its driver and forced him out at gunpoint. They shoved the senior Salem into the truck and quickly drove away while firing bullets in the air…. Peter Salem [his son] directly notified the police and filed a report. He sent an urgent plea to President Sisi to interfere in order to find his father, lest he meets the same fate of Bekhit Aziz Lamei [another Christian] who was kidnapped last August from al-Abtal village in South Sinai, and to date has not been found.

“He kept the faith till the moment he was killed,” the group Sinai Province said of the slain Copt in a statement. Several Egyptian activists have also blamed the authorities of indifference or worse in not being able to locate and secure the release of the 62-year-old Christian, which they say could easily have been done.

Prior to the clip depicting his execution, Salama appears in the same video offering a “confession,” saying he was responsible for building St. Mary Coptic Orthodox church in Beir al-Abd in Sinai, and that his “church is cooperating with the Egyptian army and intelligence’s war on the Islamic State.”

This is one of the oldest and patently false accusations Muslim terrorists make against the Coptic Church in Egypt, which itself is often victim to the government. The claim is meant to put a veneer of “justice” on the random killing of Coptic Christians.

Moreover, the “confession” was clearly derived through torture as several of Salama’s teeth appeared broken in the video, though they were fine before he was abducted, as confirmed by his son and by comparing before and after pictures. As the “confessional” was taped before his execution, his tormentors may have falsely promised his release if he only read their script. Also, when he was first abducted, the Muslim terrorists contacted his son demanding a five-million–Egyptian pound (about USD 318,000) ransom for his release.

The Sinai has been a hotbed of jihadi activity and terrorism, particularly after the Egyptian army, in response to popular uprisings, ousted President Muhammad Morsi of the Muslim Brotherhood in 2013. Christians have especially been targeted for abduction, slaughter, immolation, and mass displacement.