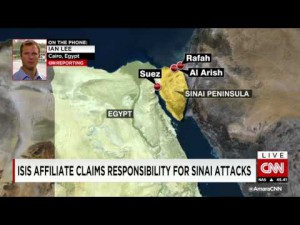 The Islamic State’s Egyptian affiliate, Sinai Province, claimed responsibility late Tuesday for firing a round of mortar shell at an airport used by multinational peacekeeping forces in the Sinai Peninsula.

Details of the incident were not immediately clear, with some Egyptian security sources saying the shells fell inside the airport, while others said they landed outside it. There were no immediate reports of casualties.