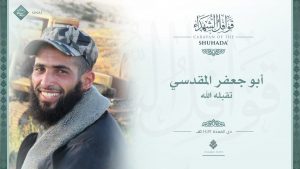 Islamic State announced the death of a senior member of the group in Egypt’s Sinai peninsula, according to a social media posting, dealing a blow to militants behind a wave of attacks on Egyptian military and civilian targets, like reported by voanews.com.

The notice, published under the heading “caravan of the Shuhada” or martyrs, showed a picture of a smiling young bearded man it identified as Abu Hamza al-Maqdisi.

Maqdisi, a Palestinian, was in charge of the group’s planning and training operations in Sinai, it said without giving any details on how he was killed, when or where.

There was no immediate comment from the Egyptian military on the report, but security sources said Maqdisi died along with two other people early on Monday in an airstrike on their vehicle near Sheikh Zweid in northern Sinai.

The Egyptian military and police have been conducting an operation in Sinai since February to crush militants affiliated with Islamic State. The operation came after an attack on a mosque last November that killed hundreds of worshippers.

The military has said hundreds of suspected militants have been killed as well as dozens of soldiers in the operation, which involves thousands of troops backed by heavy weapons and the air force.