You are here: Home / Europe / Egypt has become a pivotal country for Russia’s Middle East policies 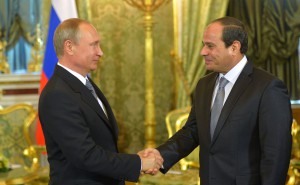 Anchoring is not so simple as it seems. Determining the location, dropping the anchor, settling the hook and, most important, assessing where the vessel is going to end up – these involve complex maneuverings. The key is to ensure that the ship is sufficiently protected, has suitable holding ground, enough depth at low tide and enough room for the boat to swing.

To be sure, what emerges out of the two-day official visit  by President Abdel Fattah el-Sisi to Moscow on August 25-26 is that Egypt has become a pivotal country for Russia’s Middle East policies

There is much poignancy in what is unfolding insofar as it harks back to the halcyon days of Soviet-Egyptian relations that ended with the departure of Gamal Abdel Nasser 45 years ago.

Looking back, President Vladimir Putin made a smart decision to back Sisi to the hilt when the latter snatched power from the elected president Mohamed Morsi in July 2013. Sisi’s coup, which was sponsored by Saudi Arabia, was viewed with distaste by most countries as a hopelessly reactionary development that might set the clock back in the democratic transformation of Egypt (and the Middle East as a whole). The brute use of force by Sisi to put down dissent and the popular opposition to the coup was found repugnant by the international community.

But Moscow saw it in revisionist terms. Russia never really cared to hide its unease toward the ‘Arab Spring’. Moscow was getting along just fine with Egypt when the Arab Spring appeared from nowhere and swept away dictator Hosni Mubarak (who was, incidentally, trained in the Soviet pilot training schools in Moscow and at Kant Air base near Frunze, presently known as Bishkek).

But Russia quickly adjusted itself to the Morsi presidency. Although the Muslim Brotherhood was a proscribed organization, Morsi was invited to visit Moscow in May 2013. However, Moscow had no tears to shed when hardly two months later Sisi locked up Morsi in jail.

When Sisi chose Russia for his first visit abroad after the coup, Moscow was delighted. Putin publicly offered him Russia’s backing for his bid for presidency (which Sisi was yet to announce at that point.)

Indeed, Putin played his card brilliantly – and cold-bloodedly. It was a magnificent display of realpolitik, with no pretensions of any high principles involved, except that Russia’s self-interests shall always be the leitmotif of its foreign policies.

Moscow calculated correctly that Barack Obama, wallowing in the delusions of America’s ‘exceptionalism’, would be simply unable to match the ease with which it could shift support from a democratically elected popular leader to a military dictator in Egypt.

The result was almost instantaneous. Within four months of being elected as president, Sisi reached a preliminary deal to buy arms worth $3.5 billion from Russia, which was an act of strategic defiance of the US on his part.

Today, Sisi is firmly in the saddle and the international community has accepted the legitimacy of his election victory last year. The US too is mending fences with Sisi. But Sisi remembers Putin’s backing when he needed such support most – and he made it a point to refer to it at his joint press conference with Putin at the Kremlin Wednesday.

But then, the convergence of interests goes far beyond mere expediency. This has been Sisi’s third visit to Russia during the past one-year period and his fourth meeting with Putin. To quote Putin, “We (he and Sisi) agree that it is in both countries’ fundamental interests to build up our foreign policy cooperation”. The agenda of Sisi’s talks in Moscow testified to that candid remark:

Even a cursory glance will tell that Putin’s realpolitik stands vindicated today. Russia is back in business in Egypt in a big way. Putin aptly described the talks as “constructive and business-like in spirit”.

Clearly, Egypt is fast emerging as Russia’s number one partner in the entire Middle East region. It makes sense for Russia to make such a strategic decision. For, Egypt is the most populous Arab nation and it has always played a lead role in the geopolitics of the region.

Sisi is also an ambitious leader who inherits the impulses of Arab nationalism, which easily meshes with Russia’s own state ideology. Besides, Russia-Egypt relations are deep-rooted and there is a vast reservoir of friendship toward Russia in that country at people-to-people level.

It is entirely conceivable that Russia visualizes a future scenario of Egypt joining the BRICS at some point in a not-too-distant future. No doubt, China will whole-heartedly welcome such a development, too.

In immediate terms, from the Russian viewpoint, the alliance with Egypt can prove to be a game changer in the struggle against terrorism in the Middle East. Moscow appreciates that Sisi has kept Egypt miles away from the Syrian rebel groups. Cairo used to be a watering hole of the Syrian rebels during Morsi’s presidency.

With Egypt drifting toward the Russian-Iranian axis over Syria, the gravitas shifts away from proponents of the ‘regime change’ agenda. Sisi is exceptionally allergic toward Turkey and Qatar for their past dalliance with the Brothers.

In the Russian perception, Egypt being a frontline state fighting the extremist groups in Libya and in the Sinai, Sisi genuinely becomes a ‘stakeholder’ in the fight against the Islamic State in Iraq and Syria. The combined weight of Russia and Egypt cannot but incrementally work on Saudi Arabia’s approach to the Syrian crisis, supplementing Moscow’s own efforts to build bridges with Saudi Arabia and its Gulf allies.

Significantly, Washington has grasped that in overall terms, the Russian initiative on Syria is likely gaining traction. The US’ special envoy on Syria is heading for Moscow and will thereafter touch base with Riyadh. Of course, Saudi preoccupations over Yemen, the turbulence in Turkish domestic politics, Iran’s robust backing for President Bashar al-Assad, Iran’s normalization process with the western countries – these are factors favoring the odds for a negotiated transition in Syria.

But having said that, in the medium term, it should not come as surprise if Cairo replaces Tehran as Moscow’s key partner in resolving the Middle East conflicts.