You are here: Home / MidEastGulf / Egypt, Hamas, ISIS and Israel after the latest rocket attack 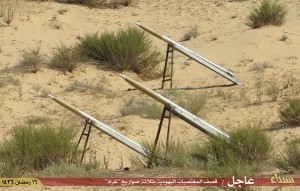 For a few hours last week, after the rockets landed in Israel, there was uncertainty from where they were fired.

At first it was thought the projectiles came from the southern Gaza Strip, but later it was reported that the Islamic State’s Egyptian affiliate in the Sinai claimed responsibility for the attack.

Hamas denied that the rockets were fired from Gaza.

Nonetheless, it’s conceivable that the group that fired the rockets on Friday was a rebellious Salafist organization in Gaza, that does not recognize Hamas’s authority and wants to drive a wedge between it and Israel. What this would mean is that despite Egyptian efforts to control them, the Sinai-Gaza smuggling tunnels are still operational.

In any case, Israel needs to be concerned about the latest rocket fire, but the incident does not mark a dramatic turn of events. In the past, formerly al-Qaida affiliated Ansar Bayt al-Maqdis, that recently pledged allegiance to the Islamic State and now calls itself Sinai Province, fired rockets on the Negev and Eilat.

Members of the Sinai Province group also succeeded in infiltrating Israeli territory more than three years ago when they engaged IDF soldiers and attacked Israeli motorists on Highway 12 that runs between Eilat and Mitzpe Ramon. That attack was carried for Hamas that wanted to open another front against Israel.

But the situation has changed since that attack.

Lately, there are signs of warning relations between Egypt and Hamas, including intelligence sharing with regard to Islamic State.

What is really important for Israel is the Egyptian military’s struggle against Islamic State in the Sinai, a struggle that will only intensify after Wednesday’s attack in which the army suffered heavy losses. But alongside its determination, the Egyptian Army seems lacking in its intelligence and operational capabilities.

The IDF and the Israel Security Agency on the other hand have extensive intelligence knowledge of the Sinai and a few years ago created a unit for this purpose. It can be assumed that in its efforts to secure the Sinai border, Israel is sharing intelligence with the Sisi regime in Cairo.