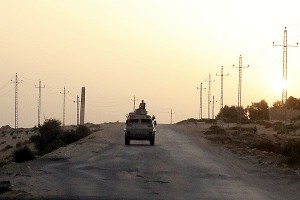 Egypt is working quickly to thwart what experts say is a change in tactics by Sinai-based, pro-Islamic State jihadists who have been striking deeper into Egyptian territory in order to make their presence known in Cairo.

To prevent what has been a local insurgency from escalating into a wider jihadist war, and giving the so-called Islamic State (IS) a foothold in Egypt, the Egyptian military for a month has engaged in a sweeping offensive in the Sinai Peninsula that it says has killed or imprisoned more than 1,000 militants.

At stake for IS is the opportunity of bringing its campaign for a Muslim caliphate to the largest city in the Middle East. But analysts warn that the Egyptian military offensive against IS runs the risk of backfiring, by making the mostly Bedouin residents of the Sinai more susceptible to IS recruitment.

The offensive, titled “Martyr’s Right,” was launched in northern Sinai in early September as part of the war with the jihadists, in which hundreds of Egyptian police and soldiers have died in several attacks over the past year.

The military campaign has been targeting Ansar Bayt al-Maqdis, a militant group that emerged in the Sinai in 2011 and late last year pledged allegiance to IS, rebranding itself as the “Sinai Province.”

On Sept. 22 Egypt hailed the initial phase of the operation as a success. In statements the military has claimed to have killed more than 500 militants and jailed 630 others while destroying dozens of “terrorist” outposts, weapons depots, and vehicles.

Observers say the campaign has come at the expense of the local Bedouin community, which has long felt disenfranchised by the government and left without services. A Human Rights Watch report in September condemned Egypt for evicting more than 3,200 families and razing hundreds of acres of farmland as part of the ongoing crackdown.

“A fear expressed by many analysts is that the nature of the response from the Egyptian state, particularly in the Sinai, is engendering discontent from the local population,” says H.A. Hellyer, associate fellow at the Royal United Services Institute in London and nonresident fellow at the Brookings Institution. “That in turn may make it vulnerable to ISIS recruitment.”

Western diplomats in Cairo have long questioned whether the spate of bombings and attacks that have plagued Egypt in the past year were truly the acts of IS.

Western officials pointed to the nature of the attacks, which had been restricted to policemen and soldiers – so-called “symbols” of the government of Abdel Fattah al-Sisi – as a sign that the attacks were more of a “local insurgency” rather than IS expansion.

Yet in the past three months, Western officials noted a troubling “change of tactics” as Egyptian jihadists began to export violence outside the Sinai.

‘Cairo is definitely in their crosshairs’

In July, fresh off the assassination of Attorney General Hesham Barakat in Cairo, Sinai Province made the bold attempt to seize the town of Sheikh Zuwaid in the northern Sinai – imitating IS takeovers in Iraq and Syria – and was driven back only with the full-force of Egyptian F-16 fighters and Apache helicopters.

Then the group struck the Italian Consulate on July 11 in the heart of Cairo with an early morning car-bombing. In August, operatives aligned with the group kidnapped a Croatian engineer off the streets of Cairo, selling him off to Sinai Province, which then beheaded him in a graphic video.

“Even if it is not ISIS, it is troubling,” says a Western diplomat on the condition of anonymity.

“ISIS benefits from having an affiliate in the Sinai, but they hugely benefit from conducting attacks in Cairo. Cairo is definitely in their crosshairs.”

No network yet of Cairo supporters

Despite the crackdown, observers say jihadist militants in the near-term will likely stay to the Sinai, taking advantage of its vast area and normally limited military presence. Observers say the requirements for a continued presence in Cairo – a vast network of supporters and safehouses and an ability to avoid detection by security services – may be outside of Sinai Province’s current capabilities.

However, officials also fear a larger alliance between Sinai Province and supporters of the Muslim Brotherhood, who have been pushed underground and threatened with arrest. A pact with the Brotherhood would give Sinai Peninsula the operational reach to cause havoc in Cairo.

There are no figures for how many former Brotherhood supporters have gone to the side of Sinai Peninsula, though former Muslim Brotherhood leaders, on the condition of anonymity, place their numbers at around 200.

Another potential threat to Egypt would be the influx of pro-IS foreign fighters from neighboring Libya, which analysts say could escalate the insurgency into a wider international jihadist war against the state.

“What could happen, of course, is with weapons and personnel coming in from Libya, the conflict becomes much larger,” says Adel Abdel Ghafar, Egypt expert and joint fellow at Brookings Doha Center.

Observers say Mr. Sisi’s government is taking notice, working swiftly to solve the problem in the Sinai before it can spread beyond the peninsula.

In concert with the military crackdown, observers say Egypt will look to boost development and win back the trust of Sinai residents, allowing millions of dollars in local and international investment in the peninsula.

“They are trying to adjust this policy. It is do or die in Sinai,” says Mr. Abdel Ghafar.

But the war is likely far from over.

“ISIS is no longer limited to Sinai, and hasn’t been for a while,” Mr. Hellyer says. “Security experts expect more [attacks] in the coming months.”