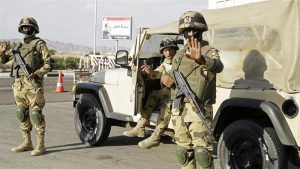 Four terrorists were killed in clashes with security forces in Arish city in northern Sinai on Monday as Egyptian President Abdel Fattah el-Sisi stressed the importance of exerted efforts to confront extremism, like reported by aawsat.com.

The four terrorists were killed in an exchange of gunfire with policemen, a security source said, adding that the extremists had used a building that was under construction as a hideout.

For the past several years, the Egyptian army has been conducting operations in the Sinai Peninsula to wipe out extremists. In mid-February, the armed forces and the police launched a major military campaign to restore security in the province.

Sisi said Monday that Al-Azhar and the Ministry of Awqaf are working on correcting misconceptions regarding Islam.

He said that Egypt has been facing major challenges in the past years, but the people had a strong will to confront them. “They were united in facing the forces of evil and darkness that attempted to destroy their homeland.”

The Egyptians resisted attempts to stir chaos and faced all threats made against the country’s security, said Sisi.

The people shed their blood for the sake of the country and in defense of its stability, he stated, adding that they patiently endured tough economic conditions and went ahead with the reforms in order to establish a modern state and an advanced society.

In his speech, Sisi tackled the resignation of PM Sherif Ismail’s cabinet, saying that the change of governments is necessary to give chances to one another.